A Meeting in Vacation’s Clothing

Make the most of your free time during a meeting in Traverse City, Michigan

Yes, it was work. But it was also fun.

I brew beer for a living. Yes, it’s fun. But, it’s also work. Imagine long hours spent in the brewery and even longer hours spent on the road visiting suppliers and vendors. Recently, I had an opportunity to attend our annual convention for a craft brewers association. I packed my bags for spring in Michigan and caught a flight to a place I’d yet to pin on my map, Traverse City.

Make time for a round of golf on one of many championship courses.

Less than an hour after touching down on the tarmac at Cherry Capital Airport, I was kicking off my shoes again. But this time, it wasn’t for TSA. The convention was held at Grand Traverse Resort & Spa. So, with a few hours to kill before the opening night’s festivities, I checked out the resort which led me to the spa where I checked in for a treatment.

Anyone who sits through meetings knows it can take a toll on your spine. Indulging in a deep tissue massage—cherry infused of course—ahead of the foreseeable sitting was heavenly. In addition to the spa—which I read was one of the top 100 in the U.S.—the resort boasted three 18-hole golf courses, including one designed by Jack Nicklaus. My poor husband was going to wish he’d come along on this work trip!

See Just How Fun Meetings are in Traverse City
Meet for happy hour at Beacon Lounge.

Don’t get me wrong. The resort is great and the food is delicious! But after a full day in meeting rooms (shout out to the signage people…this place is HUGE), we were like caged birds set free later that night when the afternoon’s events wrapped up and we headed downtown for dinner. Someone—Frank, according to his name tag—suggested we do a progressive dinner to enjoy as many of the downtown establishments as possible.

Our problem was finding the definitive place for dinner. We quickly realized we’d need days to sample everything. The offerings were spectacular, so we decided to try several.  In a matter of minutes we were noshing on sushi, tacos, ribs, pizza and even handcrafted cocktails on a silver platter—in the form of a food truck caravan. The Little Fleet was like a mini food truck convention— a meeting of the most creative culinary minds hosted in Traverse City every spring through fall. There was also live music and like moths to a flame, us meeting-goers gathered around the fire pit to swap bites and stories.

“Have you tried the Grand Traverse Pie Company?” a man in a Traverse City Beach Bum cap asked us at the food truck roundup. “It’s owned by locals, loved by celebrities.” That got our attention. Turns out, Mario Batali once referred to the bakery’s Michigan Montmorency cherry crumb pie as a “religious experience.” An hour later we agreed. Each bite was heaven on a fork.

The group was still going strong, so we took another local recommendation and headed about a mile from downtown to The Village at Grand Traverse Commons. We heard the awesome renovated structure was formerly a hospital and an asylum, and now housed a bustling collection of shops and eateries. We split into two groups at that point, those who wanted a craft beer and those who wanted a local wine to cap off a perfect day. 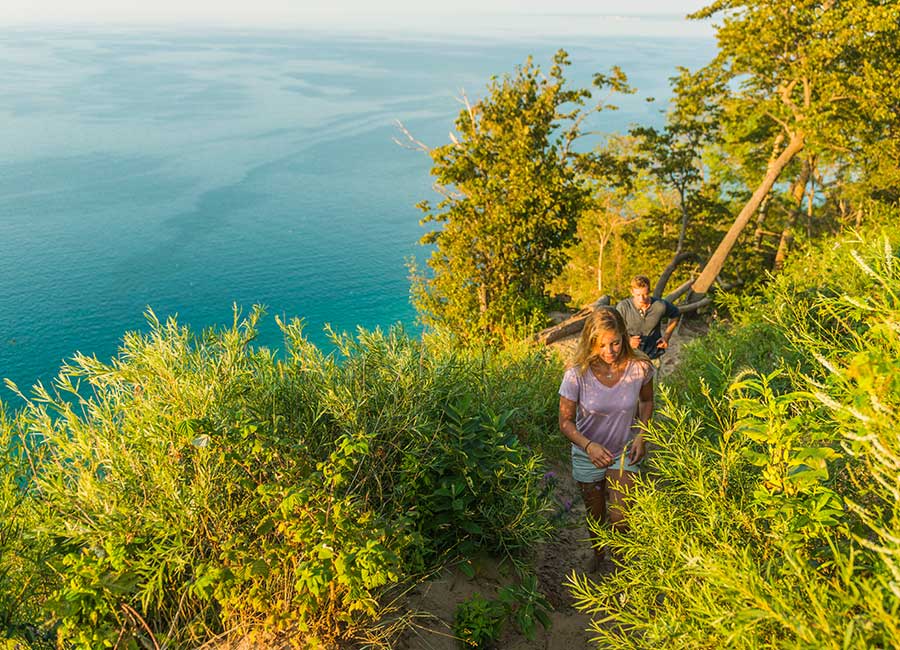 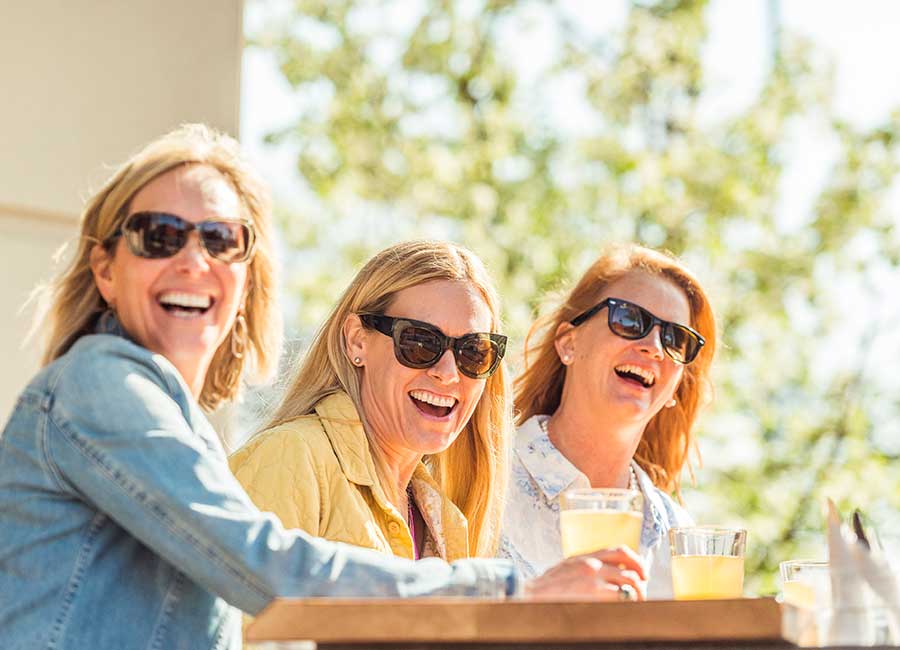 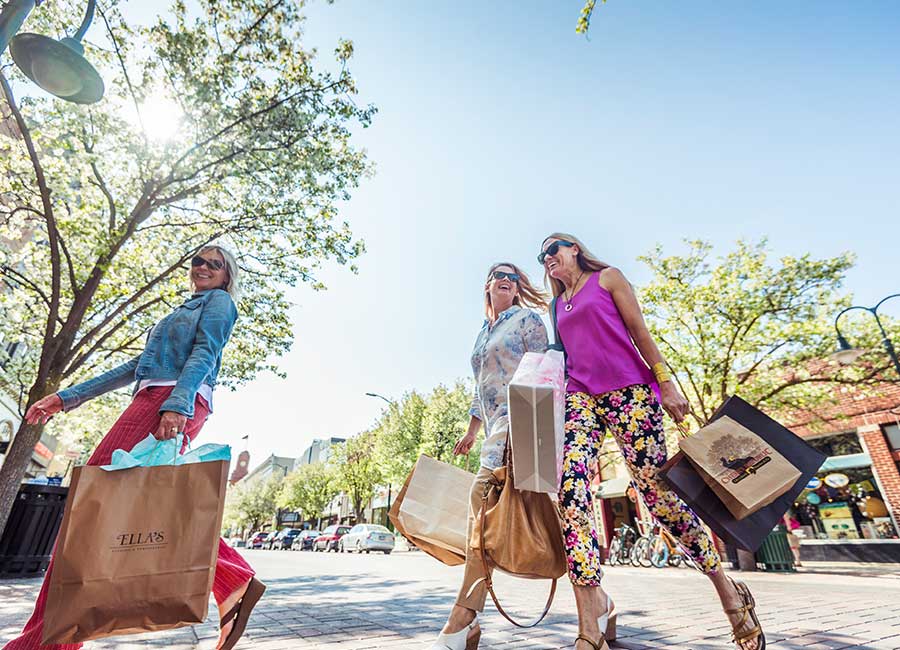 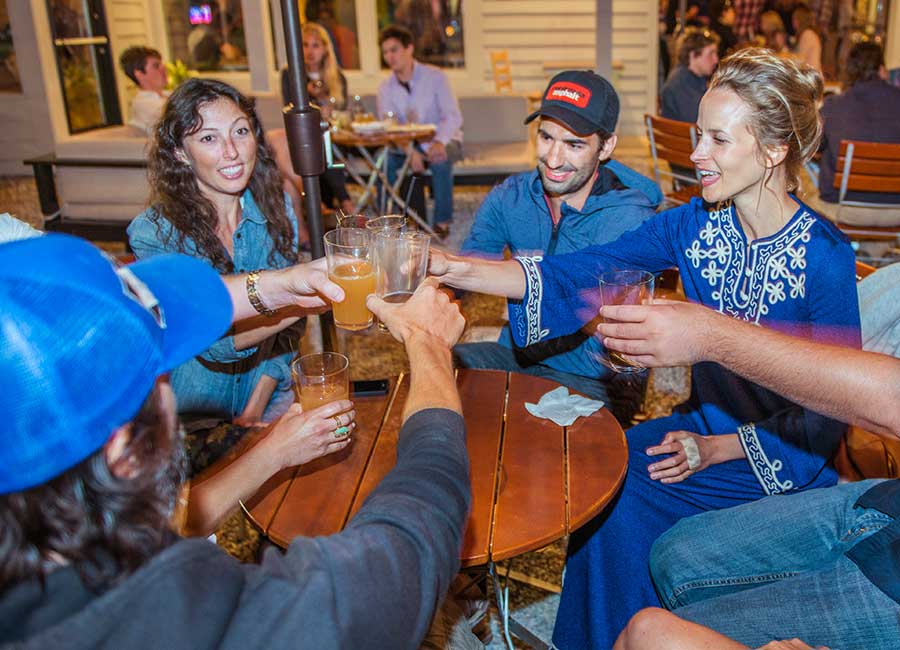 Add a waterfront hike to the agenda.

“I didn’t see a national park on the agenda!”

Not that anyone was complaining about our pseudo-field trip. Our last session of the day ended early with the speaker inviting us to join her on an afternoon visit to Sleeping Bear Dunes National Lakeshore. We’d just driven 25 miles northwest of Traverse City, yet I felt like we’d landed on a tropical island sans palm trees. The golden white sand was as fine as the coastal beaches I’d visited. And the water was turquoise meets translucent.

With the same enthusiasm I’d had at the spa, I kicked off my shoes and climbed up a dune for a better view. Walking in the soft, deep sand was definitely a workout. But the panoramic vistas of Lake Michigan were worth every step. I was not alone in my sentiments. “In 2011, Good Morning America viewers voted Sleeping Bear Dunes the ‘Most Beautiful Place in America,’” our speaker-turned-guide informed us.

On the way back to Traverse City, we passed through Northern Michigan Wine Country. Come to find out, 45 wineries and tasting rooms dot the area, with nearly two dozen along the Leelanau Peninsula Wine Trail. We stopped into two quaint spots along our route to toast the excursion with some local flavors from Traverse City’s backyard.

“Cheers to careers in beer!” 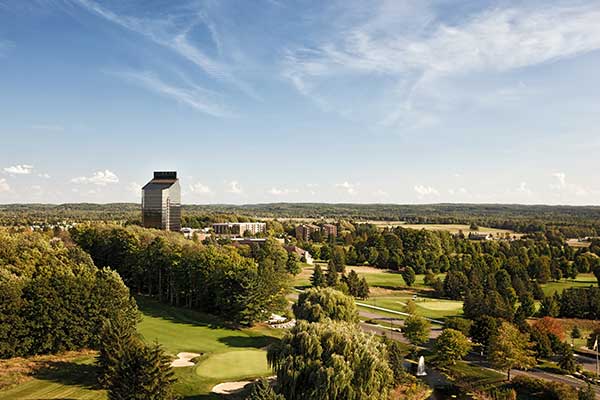 After all, this was a business trip. Or was it?

The convention’s closing ceremonies were the next morning. I left with a giant tote bag full of notes, brochures, branded bottle openers and business cards. After all, this was a business trip. Or was it? I felt like I was saying goodbye to my friends at summer camp.

My colleagues were now friends. Spring was becoming summer. And my adult notion of camp was Traverse City.

Find more ways to redefine your meetings in Traverse City.