Fall Splendor, Even in the Rain/A Hike at Pyramid Point 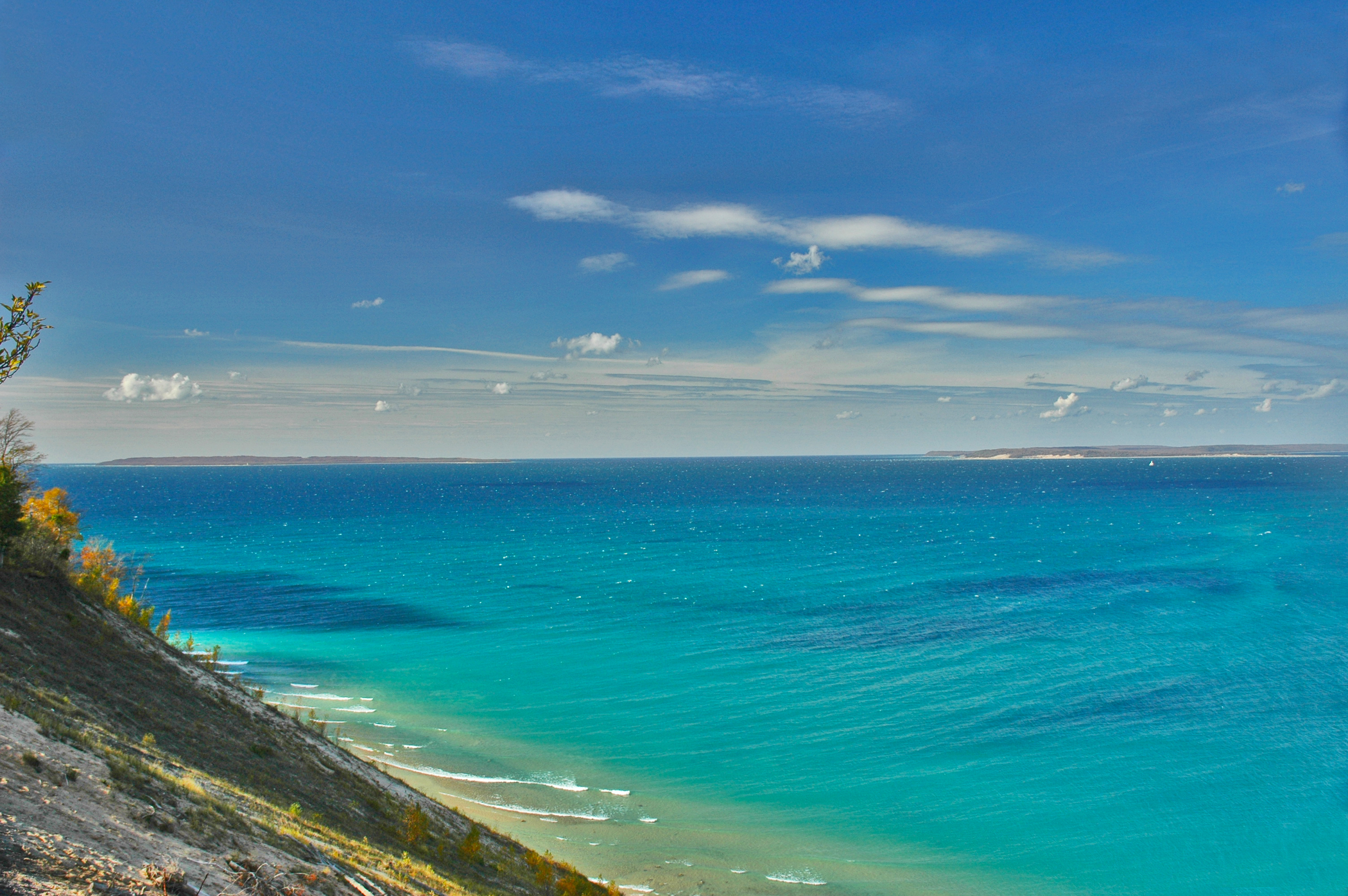 The view from Pyramid Point -- and yes, it really is that color!

I’m looking out my window right now at a misty landscape where rain squalls chase each other across the surface of the Bay like fretful and obnoxious children. Good weather for ducks, as they used to say – and I have to admit that the ducks do look pretty happy.

October is usually a gentler month here, but this weather does bring out the heroic impulse in some people. Over the weekend I watched scores of brave, drenched runners slogging along the back roads of the Old Mission Peninsula during the Traverse City Track Club’s Lighthouse Half-Marathon. And as I came to work this morning, I couldn’t help noticing that most of the hotel parking lots were still full. Looks like people aren’t letting a little rain stop them from enjoying our fall colors.

Fall Colors on an Overcast Day

And they really do look spectacular, too! We’re at peak color this week, and I’d have thought that the rain and wind would have knocked most of the leaves off the trees, but they’re still holding their own – wonderful displays of crimson, orange, gold and scarlet, set off by the dark greens of the evergreens surrounding them. And the muted light of these overcast days actually seems to bring the colors out better than the harshness of direct sunlight.

On the other hand, the gray skies tend to make the Bay and the surrounding lakes flat and dark, robbing us of the turquoise and jade tones that make autumn around here one of the glories of the world. And while it might make for a lovely color-tour drive (the kind punctuated with cozy stops at local wineshops, tea rooms and restaurants) the weather does make it less pleasant to experience the colors the way I prefer to – on foot or bicycle, or from the cockpit of my kayak.

Fortunately, I got a chance last week to get out on a truly splendid clear day for a few hours at the Sleeping Bear Dunes National Lakeshore, where I hiked the excellent Pyramid Point Trail near the park’s northern boundary. I haven’t been on the trail in many years, and in honesty I’d forgotten what an amazing place it is. (Since my last visit, the Park Service has improved the path, too – making it both easier for hikers and less stressful to the surrounding environment.)

If you want to enjoy the kind of high overlooks you’ll see along the Pierce Stocking Scenic Drive, but without the crowds or the distraction of too many man-made conveniences, this is the place for you. It’s a different landscape than the open dunelands around Glen Arbor – densely forested in beech and maple, with deep ravines and steep hillsides that plunge to wide flat meadows. 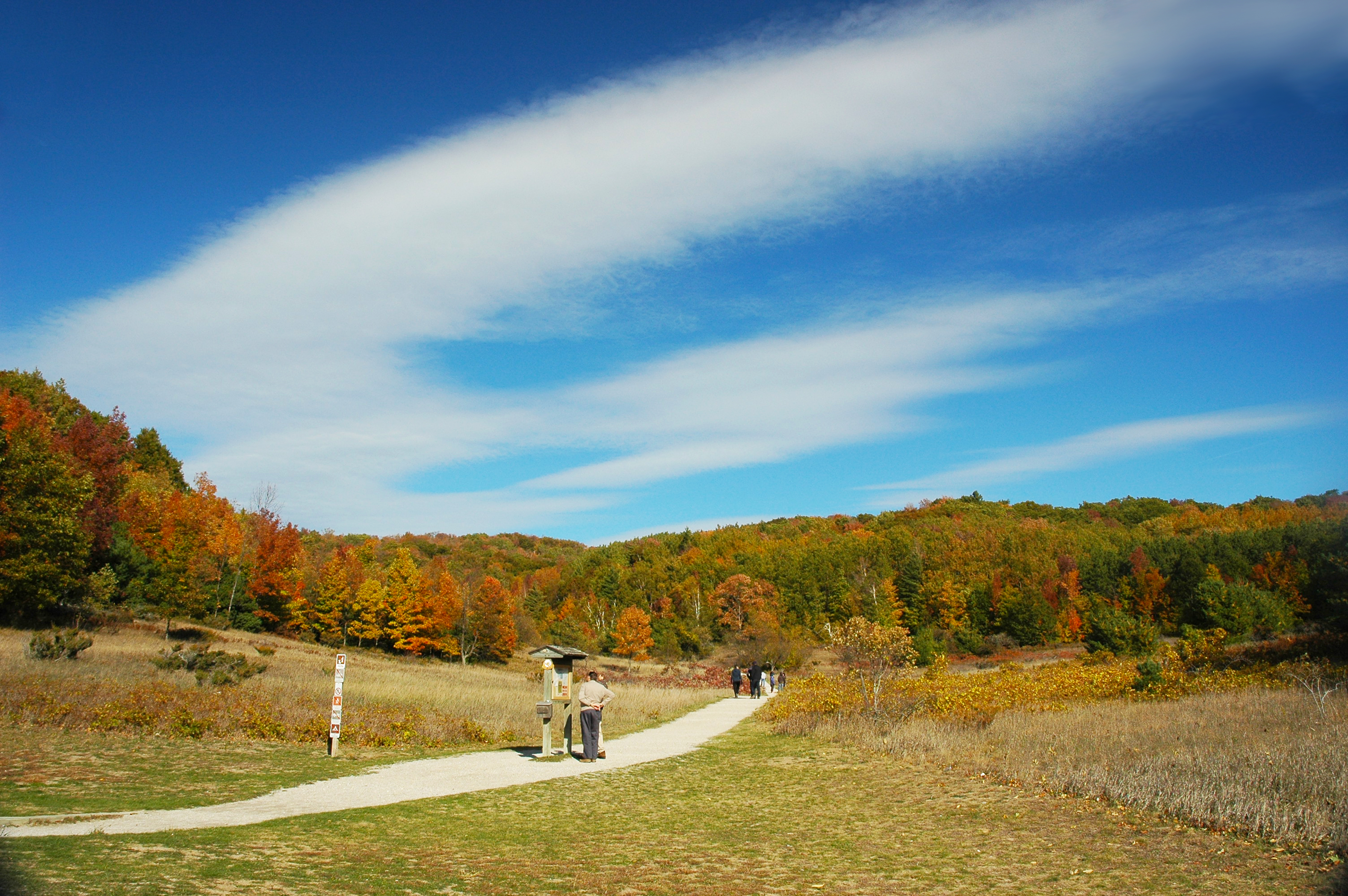 The trailhead is reached after a pleasant drive through Port Oneida, a half-forgotten German settlement whose 19th-century houses and barns lie scattered along the lakeshore. It’s a well-visited place now; even though I was there on a weekday, the small parking lot was nearly full. The three-mile trail immediately leads upward to the high lookout that’s the main draw for visitors: it’s 260 feet above the surface of the water.

That’s only about half as high as the overlook on the Scenic Drive, but it has some other advantages. First, this is the closest point on the mainland to the Manitou Islands, which seem so near that you could almost reach out and touch them. There’s also a fine shipwreck in the shallow water – the steamer Rising Sun – which can be seem pretty clearly when the light is right.  But the biggest advantage, to my mind, is that there’s no pavement or decking here – just some gnarly stumps of weather-scoured trees to sit on for as long as you like.

To continue on the trail, you actually have to backtrack down the hill (the lookout is on a small half-mile spur). But it’s a very worthwhile trip, on a path that leads down, down and down through the woods to a wonderful meadow – the remnant of some long-abandoned farmstead, surrounded by high hills. Crossing it, you eventually reach what must once have been a road that leads back up along the face of a steep bluff. 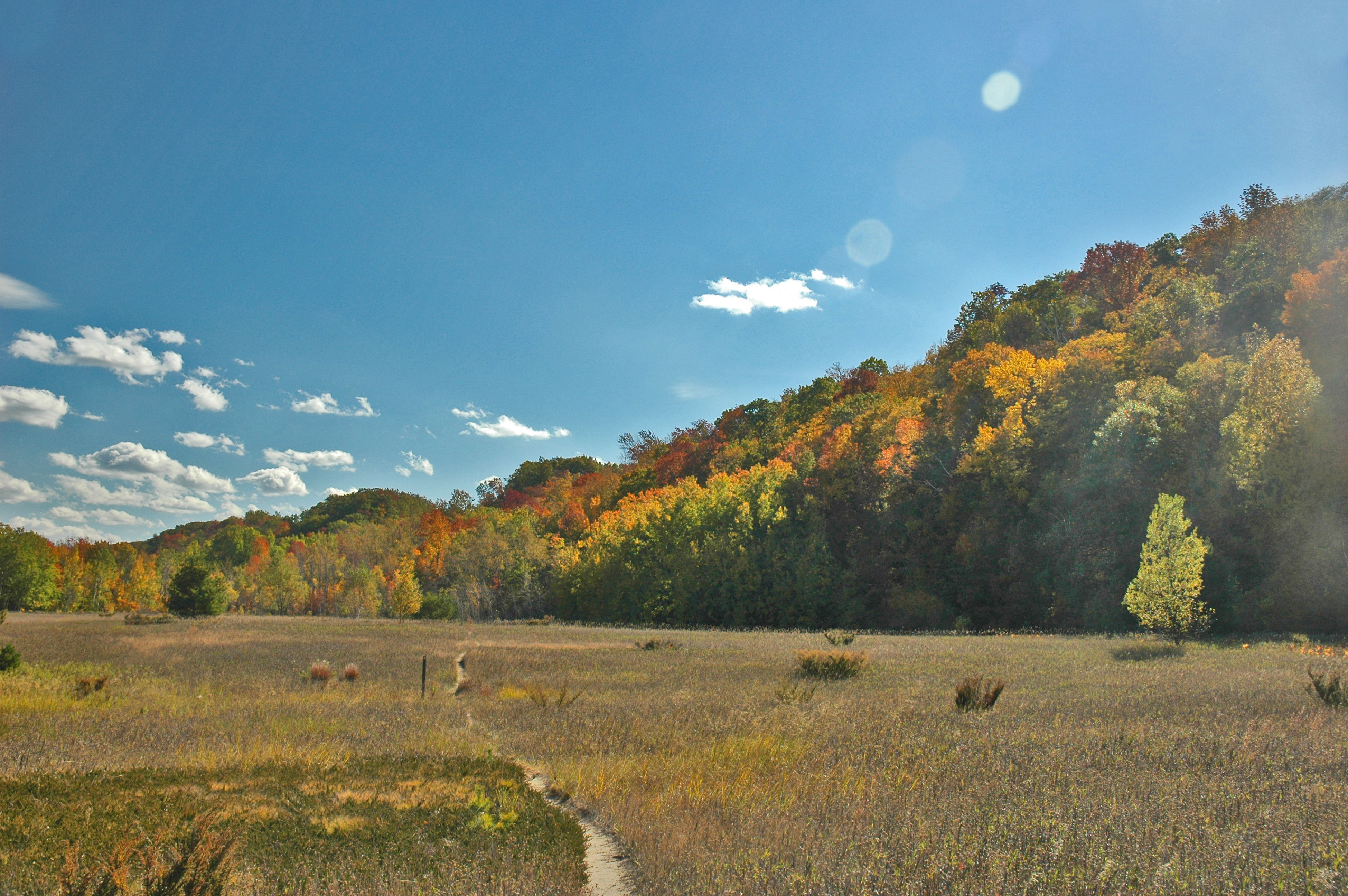 All along the way, you catch tempting glimpses of the lake far below. I’m guessing that the views will get even better in the next few weeks, as the leaves finally fall off the trees. But the trail is a marvel in itself, especially in its autumn glory, with light and shadow flickering in the deep gullies and tree-columned slopes. It’s a gentle climb, and it certainly gave me the workout I was hoping for.

Once you reach the top, there’s a gentle descent along a gravel road to the trailhead.  Easy in, easy out – and a reasonably fit hiker can do the whole thing in an hour. But really, why would anyone want to rush through the opportunity to enjoy some of the most beautiful scenery in this area?