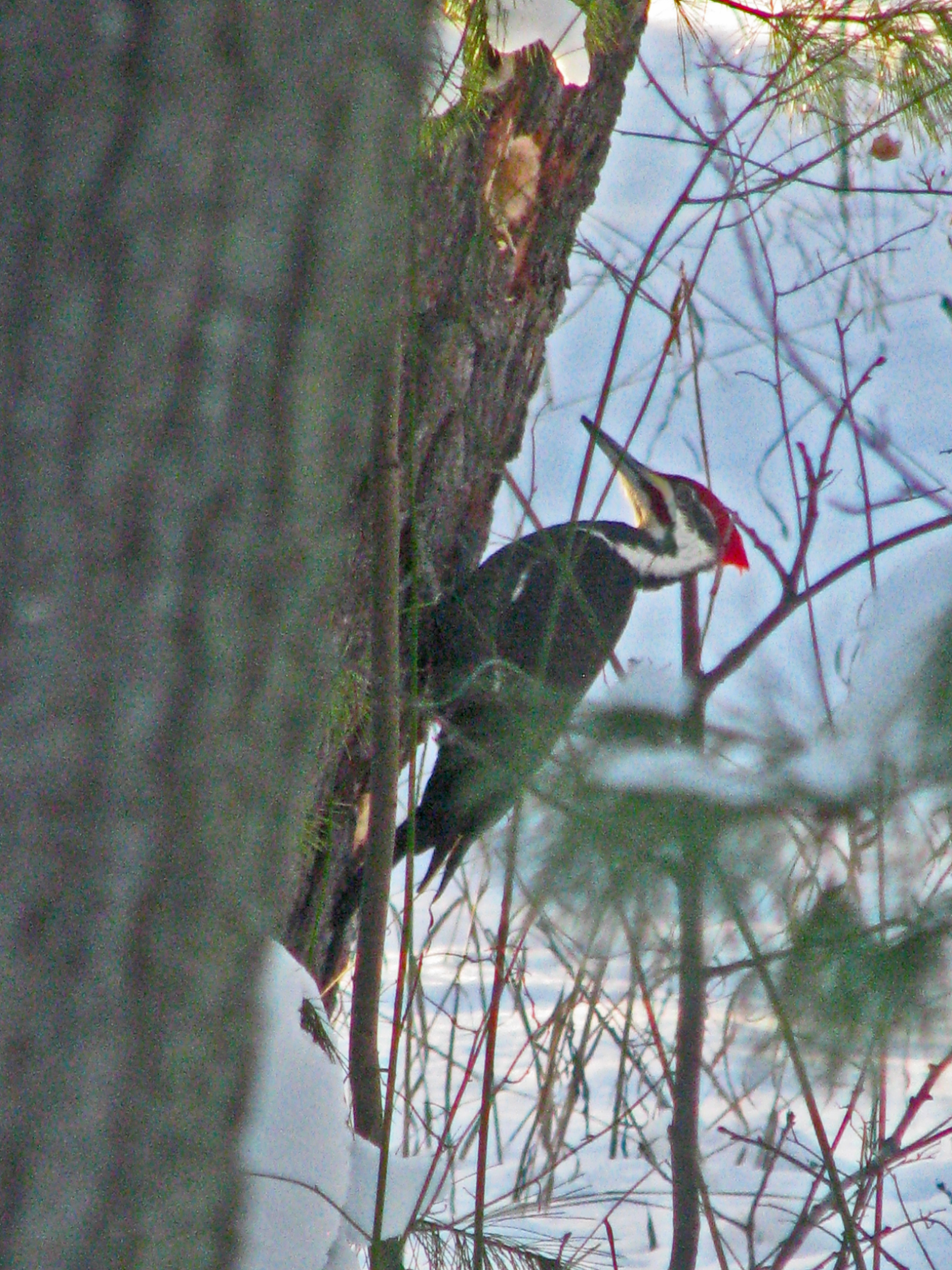 The intruder outside my bedroom window.

I barely noticed the hammering at first. Saturday morning is fix-it time, and I figured one of the neighbors was nailing a loose shingle or something. It wasn’t until I caught a moving flash of scarlet outside the bedroom window that I realized a pileated woodpecker was having his way with one of my trees.

He was pretty close to the ground, drilling into a young white pine with reckless abandon and rooting around in the hole for some tasty bugs to get him through the rest of the winter. Even though it probably means I’ll lose the tree (these guys make BIG holes) I didn’t go out and shoo him away. Instead, I just sat back and enjoyed watching the show.

Pileated woodpeckers are common in our neighborhood, and they especially like the open woodlands that surround our house. Watching their weird swooping flight through the trees, listening for their strange maniacal “jungle bird” laughter, and enjoying their beautiful black-white-and-red plumage and their sheer size is one of our daily domestic pleasures. It’s like having a half-dozen pet pterodactyls.

Could be Bud, could be Doris...

There are a lot of big birds in Old Mission – barred owls and snowy owls, swans, ravens, and two bald eagles that my wife has nicknamed Bud and Doris, who stop by frequently to perch in the dead trees overlooking the beach. Add in all the mammals (fox, deer, coyote, mink, raccoons, skunks and a host of shrews, moles, voles and muskrats) and you’ve got the makings of a nice little suburban menagerie.

It’s the sort of thing that’s usually charming and occasionally troublesome (figuring out the kindest way to remove a bat or a merganser from the living room). Most of the time, though, I don’t give it much thought.

That changed last Friday, after my boss and I had an eye-opening conversation with several visiting dignitaries from the People’s Republic of China. They were from the city of Dalian, in the northeast corner of the country – a place that, in spite of its dense population and heavy industrial focus, has a lot in common with Traverse City. It’s a tourist city with many beautiful beaches, located on a narrow peninsula, and surrounded with orchards where they grow cherries and other fruits much as we do. 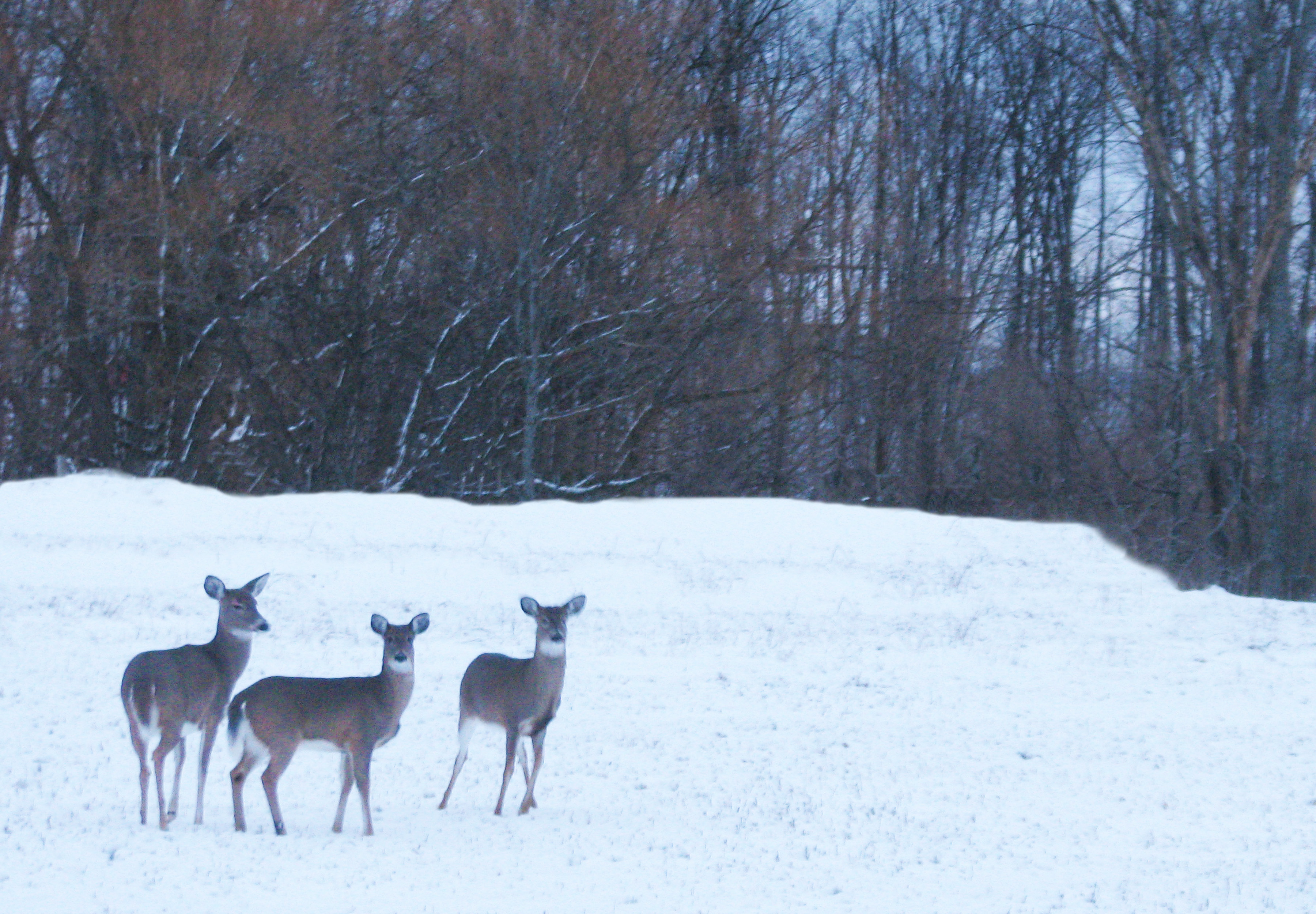 Deer at the edge of a Mapleton orchard

But one of the things they don’t have is wildlife. Of any kind.

“You have so many animals!” said one of the visitors. “I think you should put more pictures of them in your magazine. You could attract many people to your city if you let them know about all the animals they could see if they come here.”

This was a stunner. China? Land of pandas and pheasants? I found it hard to believe. But all his fellow visitors nodded their heads vigorously.

We see animals in zoos, they said, but here you have them wandering around, crossing the streets and going where they like. Last week, during a visit to the Michigan State University campus, these folks saw a squirrel in one of the trees and were so excited that they stopped dead in their tracks and started taking photos. And during their Traverse City visit they were overwhelmed by the sight of deer crossing the road as they were driving.

I laughed. “If you think we have a lot of wildlife now, you should come back in the spring,” I said. “Most of the animals are asleep now, and most of the birds are vacationing in the South.”

But it got me thinking. I don’t know why Dalian has such a wildlife deficit – it can’t just be overpopulation, since many densely populated American cities have healthy populations of human-tolerant special like squirrels and pigeons. In the end, I guess that’s not the point. What I began considering is how richly blessed we are in this particular corner of the world, and how important it is to appreciate and safeguard the treasures that have been put into our keeping.

So no, I’m not going to shoo the woodpeckers away from my trees.