Beyond the Beach: Traverse City for History Buffs 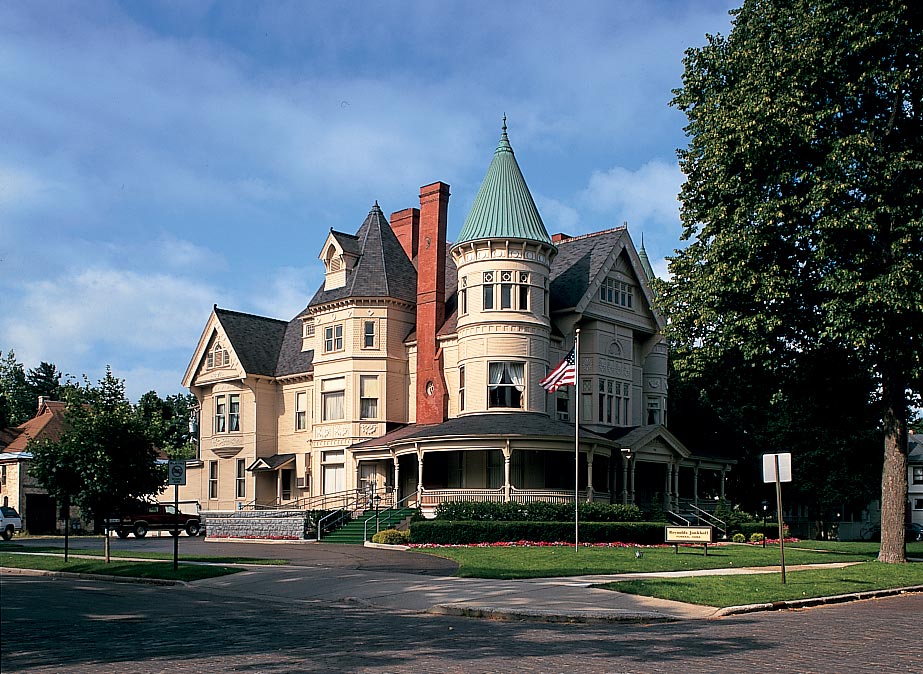 For years, visitors have been drawn to Traverse City by its dramatic natural beauty and its reputation as a four-season staging area for outdoor adventure. But there's more to this place than scenery.

In fact, Traverse City has a brief but dramatic past - a story in which Native Americans and missionaries, lumberjacks and fur traders, fishermen and farmers all played important roles. All of them left their imprints on the landscape: lonely lighthouses and humble mission churches, grand old hotels, quaint summer colonies and the palatial homes of lumber barons.

Fortunately, many of these sites can easily be visited on a brief walking tour (it's a pretty small town) while others are only a short scenic drive away. Here's my brief guide to some of the best:

The perfect place to start your journey is on Sixth Street in Traverse City's historic Central Neighborhood, known as "Silk Stocking Row," where the ornate homes of 19th century lumber barons stand above the Boardman River. The biggest of them all is the four-story 32-room house built by Traverse City's founder, Perry Hannah. It's a true showcase, with its beveled Tiffany doors, copper-clad turrets, and intricate wood paneling. (A different wood was used in almost every room -- appropriately enough for a man whose fortune came from the forest.) Today, it's the Reynolds-Jonkhoff Funeral Home.

Hannah was a young businessman in 1851 when he sailed into Grand Traverse Bay and bought  200 acres of woodlands along the shore - the future site of Traverse City -- for $4,500. Over the next half-century he and his partner, Tracy Lay, created an empire of sawmills, sailing ships and steamships, a bank, and one of the largest department stores in the north. Much of that building, once known simply as "The Big Store" can be seen if you head north along Union Street, crossing the Boardman River (where thousands of logs once floated on their way to Hannah's sawmills and ships) until you get to Front Street. The big brick building on the northeast corner, built in 1863,  is only half as large as it used to be - it once stretched for two blocks.

Across the street you'll see the red brick façade of the handsome second-story City Opera House, a source of community pride since its construction in 1891. The first building in Traverse City to install electric lights, the Opera House hosted plays, lectures, meetings, balls, concerts and vaudeville acts before closing in 1920. After years of neglect, it has been restored to its former splendor, at a cost of some $9 million, and is now used for a variety of community meetings, dances and performance events in affiliation with Michigan State University's Wharton Center.

Continuing east on Front Street, you might get the idea that you've moved back in time to the early years of the 20th century, when most of these storefronts and office buildings were constructed. In fact, many were painstakingly restored fairly recently, as local residents began to increasingly appreciate the architecture of the past.

The city was less concerned about the fate of its industrial waterfront, which is entirely gone now. This once-sprawling port of busy wharves, warehouses and factories is now a pastoral landscape of parks, beaches and marinas. Fortunately, you can get a sense of what it once looked like as you stroll along the Traverse Area Recreational Trail, where the local historical society has placed a series of 14 historical markers with photographs and text explaining the significance of each site.

Leaving the trail at Division Street and heading south will take you through one of the most interesting parts of Traverse City. In the city's early years, this area was occupied by the millwrights and woodworkers who labored in the sawmills along the waterfront. Originally known as "Baghdad" (presumably because the first homes here were tents) it was later called "Little Bohemia" because so many of its residents were from that part of Europe. But the most colorful nickname is the one that eventually stuck; today this neighborhood is known as "Slabtown" - a reference to the fact that many of the homes were built with slabs of scrap wood salvaged from the mills.

The best place to sample Slabtown's charm is at Sleder's Family Tavern on Randolph Street. Cutline: Built in 1882 as a social club for the Bohemian woodworkers, it's still a favorite local watering hole. Patrons can still belly up to the original carved mahogany bar amid a menagerie of stuffed animal heads, including a famous moose named Randolph.

Continue south on the west side of Division will bring you to Traverse City's most distinctive architectural treasure, the Village at Grand Traverse Commons. In 1885,  Traverse City was selected to be the site of the Northern Michigan Asylum, a hospital dedicated to the idea that fresh air and beautiful surroundings could ease the suffering of the mentally ill. The hospital closed in 1989, but its extensive forested grounds and stately castle-like buildings have been preserved and are being transformed into a complex of shops, restaurants, offices and apartments that has become one of the city's most appealing attractions.

Ready for a lovely drive? Then it's time to explore the Old Mission Peninsula, where the history of this region really began. Head east on M-37 and follow it when it turns north; you'll be driving along the spine of this narrow glacial peninsula that separates the east and west arms of Grand Traverse Bay. Once you leave the shoreline with its elegant homes and cottages, you enter a zone of fruit orchards and vineyards - a reminder that this is also the birthplace of Traverse City's famous fruit-growing industry.

Tucked into a secluded harbor 18 miles from Traverse City, the village of Old Mission seems frozen in time. It was founded in 1839 as a joint venture by leaders of the local Ottawa Indian tribe and a wiry Presbyterian minister named Peter Dougherty, and was a kind of social experiment: a small colony of teachers, artisans and farmers - Indians and non-Indians alike - who lived and worked side by side in this idyllic spot at the water's edge.  Some of its original structures are still standing (including the broad frame mission house built by Dougherty and his Indian neighbors in 1842) and have the look and feel of museum pieces -- except that they're still being used. 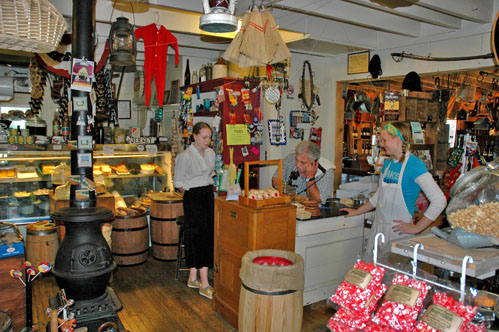 Hamming it up in the Old Mission General Store

From the eclectic Old Mission General Store, which sells everything from ice cream cones to coonskin caps, visitors can stroll down Mission Road past Dougherty's mission headquarters and the village schoolhouse (now a private residence) to the trim Old Mission Inn, the oldest continuously-operated hotel in the region. Owners Bruce and Angie Jensen have done extensive research on the history of the 1839 hotel, and love to share their knowledge with visitors. Just north of the inn is the village's New England-style congregational church with its tall white spire and the broad white beach where the intrepid Dougherty first stepped ashore.

Three miles to the north you'll find the Old Mission Lighthouse, built in 1870 to warn ships away from the rocky shoals of Old Mission Point. The simple frame structure sits on a low bluff above a wide public beach, where a sign informs visitors that they're standing on the 45th Parallel, exactly halfway between the equator and the North Pole. The lighthouse is open for tours, and is surrounded by acres of public shoreline with miles of trails for hiking, cycling and cross-country skiing.