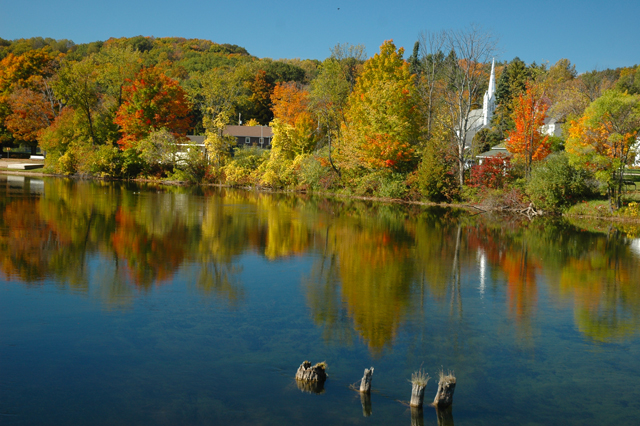 Autumn glory along the Bellaire River

Last week, I was definitely in the mood for a change of pace – and I knew the fall colors would be especially good in the area east and north of Traverse City.

Marked by steep hills and long, twisting valleys, this area’s glacier-carved highlands still have much of the rugged beauty that led Ernest Hemingway to call them “the last good country.”  Looping back and forth through this landscape is a 75-mile waterway known as the Chain of Lakes: 14 narrow separate lakes that form a sinuous chain from the high drumlins above Ellsworth to the sandy shore of Grand Traverse Bay. Several of the larger ones, like Torch Lake and Elk Lake, are considered among the most beautiful in the world, and the region has long been a favorite destination for boaters and fishermen.

But I was headed for the village of Bellaire, a quiet river town best known for its proximity to the sprawling ski and golf complexes at Shanty Creek Resorts. Nestled in rolling hills along a gentle clear river, Bellaire is a classic “Mayberry-style” small town with clean streets and a tidy, thriving downtown. 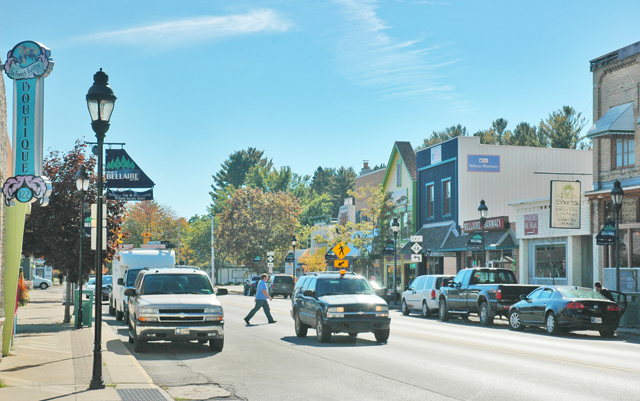 Like most communities in this neck of the woods, it was founded as a lumber town and got an extra boost from Union army veterans who were awarded land in the area as a reward for their service in the Civil War. Originally known as “Keno,” its name was changed to “Bellaire” – a way of drawing attention to its beauty and its fresh pine-scented air – in 1879. (That was the year when Antrim County residents voted to make it the county seat – unseating the port of Elk Rapids, whose inhabitants fought the proposed change all the way to the Michigan Supreme Court.

Its 1904 brick courthouse looks strangely familiar, almost a carbon copy of the one we have here in Traverse City. And In spite of a ferocious wind-driven fire that destroyed much of the town in 1921, Bellaire has a gracious turn of the century feel to it. One of its finest examples: the 1895 Richardi House, an enormous Queen Anne confection that looks like an architectural wedding cake. 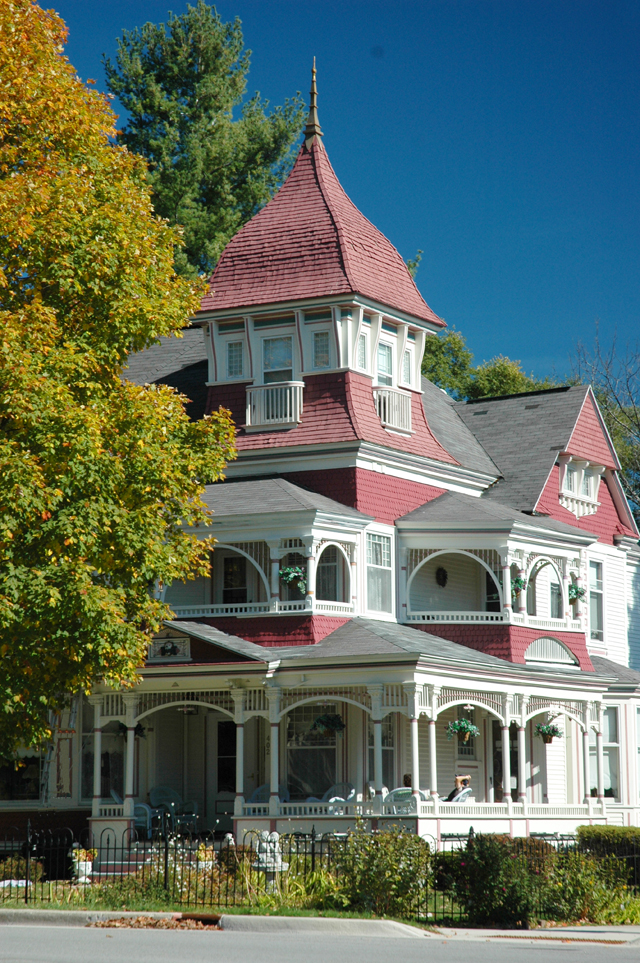 (By the way, don’t make the mistake I made by pronouncing it “rih-CAR-dee;” here they say “RICH-ar-dye.” Of course, they also pronounce the name of the town “B’laire” as if it only had one syllable.)

Thanks to the nearby resorts and a sizable population of retirees, Bellaire has remained economically healthy without pricing itself beyond the reach of middle-class vacationers. Its wide variety of year-round recreational offerings (skiing and snowmobiling in winter, birding and mushrooming in spring, golf and fishing in summer, hunting, and leaf-peeping in fall) rival those of Traverse City, which is just a half-hour to the south.

Skiers and golfers still form the mainstay of the local tourism economy. Shanty Creek Resorts (actually, three separate resorts on one 4,500-acre hilltop) operates 72 holes of championship golf (its courses include Cedar River, Schuss Mountain, The Summit and The Legend) and 49 downhill skiing slopes, and nearby are two other championship courses, Hawk’s Eye, and The Chief. (For me, it meant I could climb the steep hill at Schuss Mountain to get some great views of the surrounding autumn foliage.) 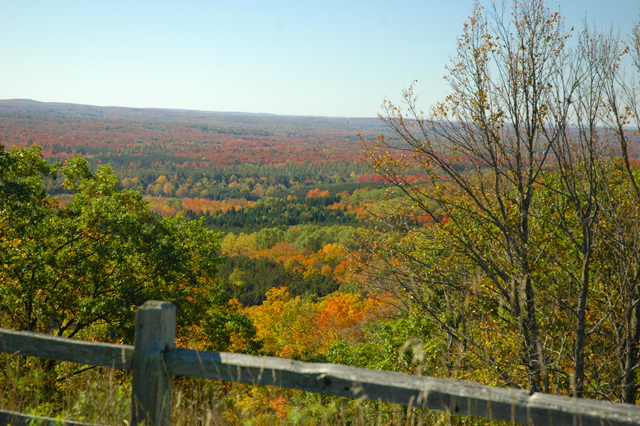 The Cedar River Valley, from the top of Schuss Mountain

Bellaire is also gaining a reputation as a center for ecotourism, thanks to the nearby Grass River Natural Area, a 1,165-acre nature preserve where visitors can hike miles of trails, enjoy birdwatching, cross-country skiing and snowshoeing, and enroll in guided nature tours and classes. 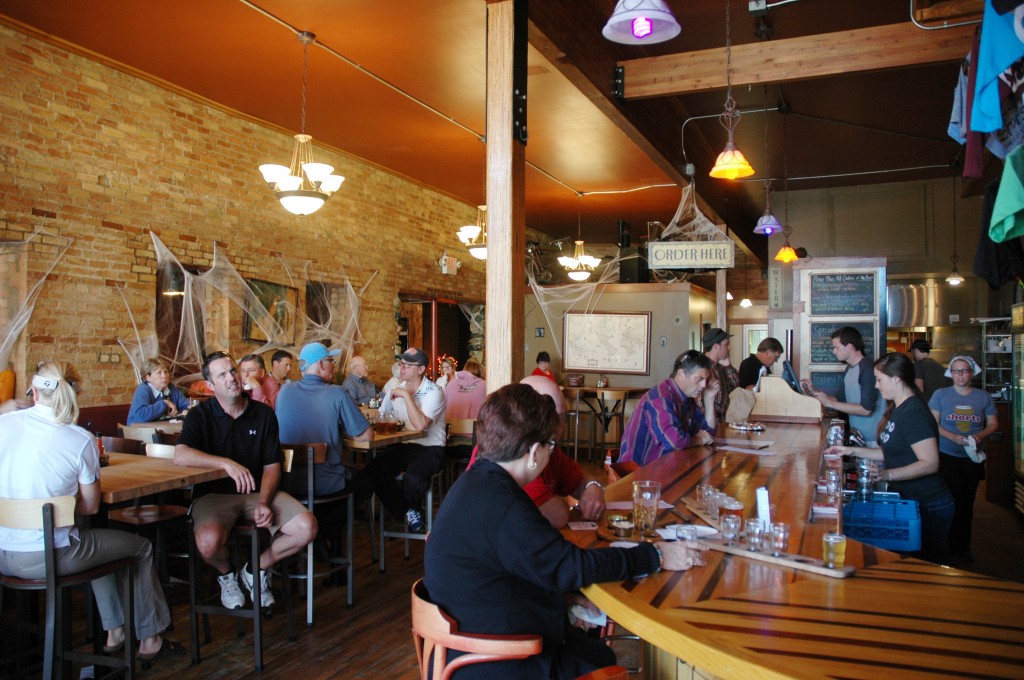 The afternoon crowd at Short's

Not to be outdone, brewmaster Joe Short followed up in 2003 by starting Short’s Brewing, a microbrewery, and brewpub located just a few doors down the street. Short’s creatively-brewed beers, ales and stouts have won multiple international awards and made him one of the fastest-growing microbreweries in the country – but the pub’s food menu is nearly as imaginative. In their wake, other “foodie businesses” are sprouting up around town, and even the big resorts on top of the nearby hill are offering some great food. (I also understand that the delightful little Applesauce Inn B&B has acquired quite a reputation for its tasty and imaginative breakfasts.)

Bellaire’s small downtown has a handful of entertaining shops, from cottage accessories (Uniquely North) to educational toys (Little Treasures). One of my favorites – beside Short’s, of course – is the Bellaire Smokehouse with its tasty smoke fish, jerky and other meats. There’s even a great little downtown movie theater that’s still in operation.