At Last! Traverse City Gets a Taste of Bohemian Cuisine

One of my favorite places is about to celebrate its 80th birthday – and in the best possible way.

The Little Bohemia Tavern (known to a generation of Traverse City barflies as “Lil Bo’s”) is having a birthday party Wednesday night to mark the day when businessman Frank Kucera created a Front Street hot dog stand (and secret speakeasy) during the dark days of Prohibition.

I’ve loved this place because of its awesome olive burgers, but also because it’s one of the few Traverse City watering holes in this age of standardization that still preserves the feel of an earlier, more authentic Traverse City. But now I’m even happier – because the Little Bohemia is now starting to serve Bohemian food.

As a tourism guy in a famous “foodie town,” I’m constantly talking to food writers and travel writers who want to know where they can sample authentic Traverse City food. And I tell them that unless they want to hang out at a few good church potlucks or the annual powwow at Peshawbestown, they’re pretty much out of luck.

Traverse City’s main immigrant population was made up of Bohemians. Beginning in the middle of the 19th century, these industrious Central European immigrants (not the garret-dwelling artists celebrated in Puccini’s La Boheme, but inhabitants of what’s now the Czech Republic) helped turn this region from a raw lumber settlement into the thriving resort area it is today.

But Traverse City has no Bohemian Festival -- and even though Bohemian cuisine is tasty, hearty and based on lots of locally-available ingredients, it’s been impossible to find it in any of our much-vaunted restaurants.

Until now, that is.

Several months ago, owner Nancy Freund decided to take the Lil Bo back to its historic roots. She started by changing the name back – but that got people thinking about Bohemian food, and they started asking for it. Intrigued, Nancy began looking around for authentic family recipes, and she found some. Now the tavern is serving tasty Bohemian treats like veprova pecene (slow-roasted pork with dumplings, apple gravy, and sauerkraut.)  And it looks like there’s more to come!

The Bohemian presence is still strong throughout this area, from Traverse City’s Slabtown District to the prosperous farms of the Old Mission and Leelanau peninsulas. And a “Bohemian tour” can make a picturesque and intriguing itinerary for visits to the area.

So just how did Traverse City become such a “Czech magnet” anyhow? The roots of the Bohemian Exodus go back to 1848, when authoritarian governments throughout Europe crushed a series of revolutionary uprisings, sending thousands of disappointed reformers into exile. Better educated and more prosperous than most immigrant groups, the Bohemians of 1848 were drawn to places that offered them opportunities to exercise their considerable mechanical skills and craftsmanship.

One such place was Traverse City, whose burgeoning sawmills needed skilled machinists and woodworkers. The mill owners were so glad to see the new immigrants that they offered to let them use slabs of scrap lumber to build their own houses, which is how the millworkers’ district (sometimes known as Little Bohemia) came to be known as Slabtown. Many of those tidy cottages are still standing – and so is Sleder’s Family Tavern, a 127-year-old social club that is still a favorite hangout for locals and visitors alike. 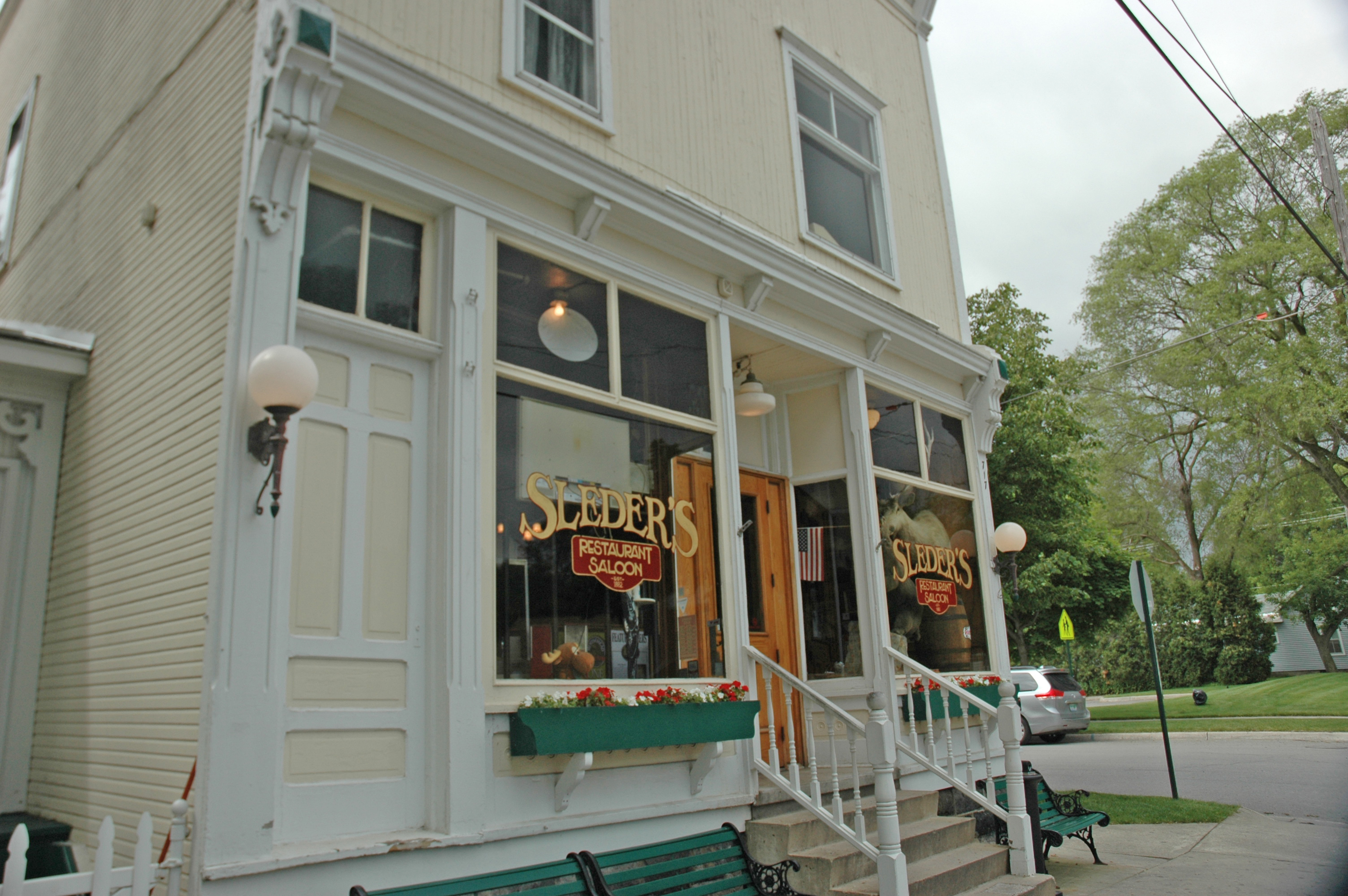 Built in 1882 by wheelwright Vencel Sleder and dozens of strong-bodied fellow-countrymen using those free scrap wood slabs, Sleder’s is the oldest continuously operated saloon in Michigan. (Thanks to the nearby waterfront and some creative labeling, Sleder’s even endured Prohibition without much difficulty.) It still looks much as it did when Czech was the only language you were likely to hear here; the massive 21-foot mahogany bar, hauled up from the beach on logs by a crew of thirsty Bohemians, is a sight in itself.

The tavern does retain some unusual traditions, though – including Randolph the Moose, whose stuffed head is one of many mounted on the wall above the dining area. Patrons are regularly invited to pucker up and plant a kiss on his leathery lips in what has become a local rite of passage, though only a brave handful actually summon up the gumption. (It’s much easier simply to purchase one of the tavern’s “I Smooched the Moose!” T-shirts and let everyone think you did.)

In fact, although many of the area’s Bohemian settlers were farmers, tailors, druggists and doctors, their most enduring legacy seems to be in the saloons and taverns they left behind. Novotny’s Saloon, one of the most famous in Traverse City, is now the site of the Blue Tractor Cookshop. But the most ornate example of Bohemian woodworking skill can be found at Traverse City’s opulent City Opera House, built in 1891 by “three Bohemian brothers-in-law,” Charles Wilhelm, Anton Bartak, and Frank Votruba. Refurbished in recent years, it’s the oldest historically intact Victorian-era opera house in Michigan, with 43-foot vaulted ceilings.

Bohemian farmers who settled on the nearby Old Mission Peninsula included the large Kroupa clan, whose descendants now run the Peninsula Cellars winery and vineyard. Most of the original Kroupas are laid to rest in the tiny Bohemian Cemetery near Bowers Harbor – another graveyard with a million-dollar view. But most agriculturally-minded Bohemians settled across the bay on the Leelanau Peninsula, where their names are permanently attached to places like Greilickville and Shalda Corners. 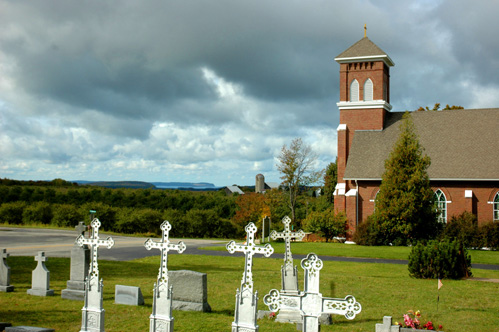 The jewel of this sprawling Bohemian settlement (known as Gill’s Pier -- even though sawmill owner William Gill and his pier are long gone), is the church of St. Wenceslaus. It’s sometimes called the “disappearing church” because it appears and disappears from view on its lonely knoll as one approaches it from the south, and its picturesque graveyard is festooned with ornate wrought-iron crosses that give it an exotic look.

It also boasts one famous occupant. A modest headstone beside the plain steps that lead up from the parking lot bears an inscription that’s startling to anyone even remotely familiar with world history:

Technically, the full title should be “His Imperial and Royal Highness Archduke and Prince Stefan of Austria; Prince Stefan of Hungary, Bohemia, and Tuscany.” Scion of an ancient and powerful family whose empire included more than half of Europe -- and for a brief time even Mexico – until it was dissolved in 1918. A man who lived almost his entire life in exile (including five years in Transylvania as a resident of Castle Bran, the one built by Count Dracula) and finally found rest here on Michigan’s scenic Leelanau Peninsula, beside a church dedicated to a saint who was himself a Duke of Bohemia.

The region surrounding St. Wenceslaus, known as the Bohemian Valley, is one of the loveliest and least-visited places on the Leelanau Peninsula, its steep hillsides covered with vineyards and orchards, with tempting views of the wild blue of Lake Michigan around each corner. A visit to the valley makes an interesting addition to a fall color tour or a wine-tasting expedition.